In Another World With My Smartphone Wiki
Register
Don't have an account?
Sign In
Advertisement
in: Terminology

Bride Conference (嫁会議, Yome Kaigi?) is a conference held by the brides of Touya Mochizuki. Yumina Ernea Belfast acts as the leader and also the spokeswoman of the conference while Leen acts as vice leader of the conference[1]. The purpose of the conference is seemingly to discuss any problem that is related to the brides, including when there is a prospective bride joining the group.

After Touya Mochizuki accepted the Mansion which is a gift from the King of Belfast for Touya's service toward the king. He expressed that it would be difficult to clean such a big house with only 5 people in it, which surprised Linze, Elze, and Yae. Touya had only been engaged to Yumina while Linze, Elze, and Yae thought themselves as outsiders, and were thus affected by Touya's last statement. Yumina perceptively took Linze, Elze, and Yae out separating themselves from Touya and Kohaku for a closed girl-only meeting[2]. It then later revealed that Yumina had asked the other girl about their feelings toward Touya and her plan to not monopolize Touya[3].

When the Regulus Empire coup d'état was happening, Touya brought Lu, the unconscious Zephyrus Roa Regulus, and Caroline Rillettes to one of the room at his mansion. Yumina was peeping when Lu was happily opening up toward Touya. Yumina then gracefully came into the room and Lu politely introduced herself and so did Yumina. Yumina also introduced herself as Touya's fiancée which immediately changed Lu's radiant smile to sour. Being keen with that facial expression, Yumina asked Lu for a secret-four-eyed talk in her room[4]. After saving the monarch of Regulus Empire from overthrow, the Emperor of Regulus offered Touya anything that he desired. Touya gently refused the offer which then interjected by the King of Belfast who immediately said that he had done the same but, in the end, he could only gave Touya a mansion, some money, and his daughter to be Touya's wife. Hearing that from the King of Belfast, the Emperor of Regulus also offered his daughter to be Touya's wife. Yumina then interrupted the discussion by saying that Lu had the same idea with the rest of the fiancées and also would accepted her as one of them. Linze, Elze, and Yae who also present, voiced their agreement on the idea. After being talked by everyone in the room, Touya who previously rejected the idea, changed his mind and accepted the offer[5].

After the only princess of Knight Kingdom of Lestia, Hildegard Minas Lestia, confessed that she loves Touya Mochizuki, a bride conference was established. Their first meeting was to determine whether other fiancées who, are at the time consisted of Yumina, Linze, Elze, Yae, Lu, and Sue, objecting the plan of the engagement between Touya and Hilde or not. Based on voting among the brides, they agreed and supported Hilde's decision to become Touya's 7th wife. Despite being present in the conference, Touya had been disenfranchised by all of his fiancées which frustrated him. Upon uttering his resentment, Yumina retaliated and cornered him with questions regarding Hilde's character, physical appearance, and his opinion toward the princess. Touya was unable to refute his fiancée, he decided to accept Hilde as his fiancée.[6]

Pam, an Amazons tribal girl who was rescued by Touya Mochizuki when he came to Great Sea of Trees, was suddenly coming to Brunhild Dukedom with a proposal to bear Touya's child. A second conference was immediately held with theme "Should they accept Pam or not" by all of Touya's fiancées who, are at the time consisted of Yumina, Linze, Elze, Yae, Lu, Sue, and Hilde. Because Pam's motivation was only to bear Touya's child but then she only would care for a girl child without any mean for becoming bride, all of Touya's fiancées agreed to not accept Pam. Meanwhile, Pam did not understand why she couldn't bear Touya's child. In fact, she already gave Touya a special mark, the Oathbite (誓いの牙, Chikai no Kiba?), which for her, means Touya is owned by her. The purpose of Pam's journey for searching Touya was to have his child for winning the Pruning Ceremony, a battle tournament which held once a decade, and rose her tribe as the leader of the Great Sea of Trees after constantly losing for the last 70 years. In order to spare Touya from Pam's proposal, Yumina proposed that they would help Pam so her tribe won the tournament and if they won, Pam should gave up on Touya. In the end, Elze, Yae, Lu, and Hilde became the representative for Pam's tribe on the tournament.[7][8][9]

When Touya Mochizuki and Leen came back from rescuing the Sandoran slaves, they were greeted with creepy fake smiles by all of his fiancées, which at the time are Yumina, Linze, Elze, Yae, Lu, and Hilde. The discussion then continued at the conference where, Yumina, the other fiancées, and Leen sat down at the table while Touya was the only one who was sitting (正座, seiza?) on the floor. Yumina, who spoke for the group, then start by accused Leen who suspiciously grew closer with Touya Mochizuki for romance interest. Leen was not denying her interest toward Touya while she did not as passionate as the fiancées. While she praised and admired Touya's personality, she also unashamedly said that she would still used Touya's ability for searching the legacy of Babylon. After Leen's confession, she then confidently stared into Yumina's eyes, who kept looking at Leen using her Mystic Eyes during the confession. Being able to understand Leen's intention, Yumina became soften and accepted Leen as one of Touya's fiancée. The other fiancées also echoed the same agreement with Yumina. While Sue was not present at the time, Yumina believed that she would also accept Leen without any problem. Touya who saw all of the discussion had no objection toward his fiancées choice or Leen therefore he openly accepted the conclusion of the conference.[10][1]

Sakura was shocked after Touya Mochizuki successfully returning Sakura's memory using 「Recall」. Touya could feel her trembling body -who had grasped her body with both of his hand- after the suspense memory had came back into her mind while, on the same time, she smiled with slightly pale face to facade her intense fear. Touya empathetically petted Sakura's head which made her to happily clinging onto Touya. The fiancées, who at the time are Yumina, Linze, Elze, Yae, Lu, Sue, Hilde, and Leen had already peeping on the door, lining up vertically at the slit of the door, when Sakura was tightly clutching herself onto Touya. All of his fiancées then burst in and exclaimed Sakura as the questionably ninth wife. Right after that, the conference immediately started. The discussion was concerning Sakura's assassination attempt, her position as the heir of the Demon Kingdom of Xenoahs's throne, and her mother condition and immigration to Brunhild Dukedom. The discussion was postponed until Touya, Sakura, Kohaku, and Spica returned from Demon Kingdom of Xenoahs for resolving the problem.[11]

During his visit at Demon Kingdom of Xenoahs, Touya asked Sakura's father, the Overlord, for permission to marry his daughter[12]. Upon returning to Brunhild Dukedom, the conference was continued. Yumina easily accepted Sakura as the ninth wife and felt relieved that it was not somebody else and Sakura is the last person. The same concern was voiced by Elze, Yae, and Leen. The conference was concluded with Sakura acceptance.[13] 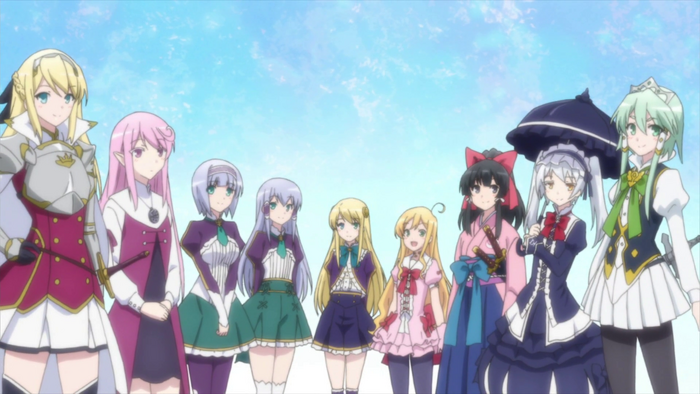 Note: hover your mouse over the image to see each wife's name

*based on their first appearance. **formerly.

Each wife has some astronomical symbol on their clothing