In Another World With My Smartphone Wiki
Register
Don't have an account?
Sign In
Advertisement
in: Terminology, Weapons

Brunhild (ブリュンヒルド, Buryunhirudo?) is a weapon Touya Mochizuki created in order to replace his broken sword[1].

It is basically a combination of a six-shooter firearm and a melee weapon, allowing Touya the ability to attack at long and close ranges. The Gunblade has been equipped with several spells using the Program Spell[citation needed].

The first and original Brunhild was made of the horn of the black dragon that Touya and his companions slew in the Kingdom of Mismede[citation needed]. This original gun was loosely based on the Remington New Model Army revolver[citation needed]. However, when Touya acquired the Workshop of Babylon, he scanned this earlier model and recreated it using Mithril, and improving its capabilities[citation needed].

Blade mode during combat against Elze and Yae 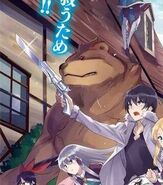