Dark Magic (風魔法, Yamimahō?) is one of the attributes of elemental magic that exist in the In Another World With My Smartphone series. This type of magic is exclusive to mages with the Dark (風属性, Yamizokusei?) affinity.

Despite being called Dark Magic, there is nothing inherently evil about this type of magic other then how one uses his/her summoned beast[citation needed]. 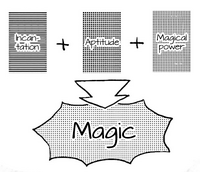 The summoning in the world of In Another World With My Smartphone works based on contracts.

For make a contract the user need to do the following steps:

Until now the summoning magic seems connected only to the darkness attribute but this fact don't prevent the chance of summoning divine beasts or holy beings.

As stated above, almost all dark magic is summoning magic. The following summoning spells have been seen:

It is also notable that those summoning spells were used to summon the Divine beasts, but those can be found here

Because Light Magic is used to heal people it makes sense that Dark Magic (which is regarded as the inverse of the former) is used for the opposite effect, drawing out damage continuously rather than by direct attacks. Spells of this kind are referred to as Curses. As those spells have long been lost to time, the only people who can use them are people with affinities for all seven attributes.