In Another World With My Smartphone Wiki
Register
Don't have an account?
Sign In
Advertisement
in: Article stubs, Pages With Incomplete Sections, Terminology

This article is a stub. You can help In Another World With My Smartphone Wiki by expanding it.

The Phrase (フレイズ, Fureizu?) are crystal creatures from Phrasia who are searching for the Sovereign Phrase.

The Phrase is a race that comes from another world. They are led by the Sovereign Phrase, who is the most powerful of them all.

Phrase are unable to locate Melle's core when it's in a living being[citation needed]; hence why when they find the world it went to, they begin slaughtering all its lifeforms to force the core to reveal itself.

The Phrase have been chasing their former leader Melle for a long time; ignoring her wishes to be left alone for the sake of taking her back to use her power for themselves. Unable to locate her core when its in a living being, the Phrase indiscriminately slaughter the population of worlds Melle's core went to. Ende has been fighting them off for years, though he was able to make an ally in Lycee (and her sister eventually).

In the present twin dominant class Phrase teamed up with the lower class NEET god to create a beast to kill for them. However, the beast turned against the god and ate him, transforming them into a golden cocoon. The twins used this golden power to enhance their own powers and the lower class Phrase. Ultimately they and the newly born Evil God were destroyed thanks to Touya and the World Alliance, putting an end to the Phrase faction after Melle.

The Humanoid Phrase speak an altered form of Japanese. The original sentence is romanized, the spaces are removed, and random characters are inserted.

Countries attacked by the Phrase 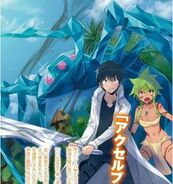