In Another World With My Smartphone Wiki
Register
Don't have an account?
Sign In
Advertisement
in: Web Novel, Web Novel Story Arc

Called to Another World

April 14, 2013
Called to Another World (異世界来訪, Isekai Raihō?) is the first story arc introduced in the In Another World With My Smartphone web novel series.

Touya Mochizuki was struck by lightning and was killed accidentally by World God. For make up his mistake, World God revived Touya to another world and gave him one thing that he want to bring from his old world. Touya chose his smartphone. In the new world, he first met Zanac Zenfield, an eccentric tailor who bought his uniform for 10 gold and transported Touya to his first town, Reflet Town. At Reflet Town, Touya met Micah, the innkeeper of Silver Moon where he stayed at, and also the Silhoueska twins, Elze and Linze after he saved them from trouble. Touya, Elze, and Linze registered themselves to Adventurer Guild in town and formed an adventurer group together. While doing so, Touya also learned about the world's writing system and magic from Linze. Touya also introduced vanilla ice cream to the owner of coffee shop, Aer. 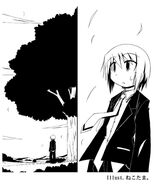